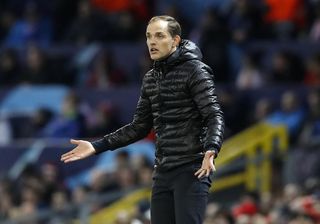 Paris St Germain boss Thomas Tuchel admitted his players were struggling to maintain their performance levels after their 1-1 home draw against Nice.

Tuchel’s side, who sealed the Ligue One title two weeks ago, needed Neymar’s second-half penalty – his 50th goal for the French champions – to rescue a point after Ignatius Ganago had fired Nice ahead early in the second half.

Nice goalkeeper Walter Benitez saved Edinson Cavani’s stoppage-time penalty to leave PSG with one win in their last seven games in all competitions.

“It’s true that since the last international break, it has been more difficult for us to play our best football,” Tuchel told a post-match press conference.

“I am not angry. I’m not satisfied, but I understand what is happening.”

PSG had lost three of their previous four league matches before facing Nice and were beaten on penalties by Rennes in last week’s French Cup final.

“At the moment, the matches are a little bit like friendly matches,” Tuchel added. “We are lacking the tension from the earlier matches.

“As a result, we are lacking a little speed, rhythm and desire to make the difference. Everyone is realising that it’s not easy to win every match.

“We are 11 players and it’s not enough just to step out on to the field wearing the Paris St Germain shirt in order to win. It also proves how well we have worked until now.”

Benitez made several excellent saves, from Neymar and Angel Di Maria in particular, to keep the first half goalless, but Nice threatened themselves on occasions.

Allan Saint-Maximin was inches away from giving Nice a two-goal lead when his second-half effort hit the crossbar.

“We should put chances like that away,” Nice boss Patrick Vieira told a press conference.

“Youcef (Atal) did a great job down the wing, but Allan tried to hit it with the wrong part of his foot and we lacked a bit of luck too as it hit the crossbar.

“Against a team like Paris, if you can’t score that second goal, you will struggle when they accelerate the play, and that’s what they did.”

Nice remain in seventh place, two points off a Europa League qualifying place, and Vieira was happy with his players’ performance.

“My feeling is positive because it’s never easy to get a point at the Parc des Princes,” he added.

“Tactically we were well-organised and we played well, even if we lacked a little desire in attack.”