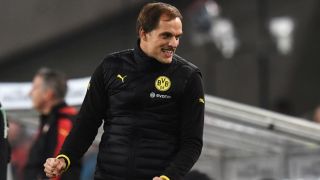 Thomas Tuchel praised his Borussia Dortmund side for playing "a perfect game" in their 3-1 DFB-Pokal quarter-final win at Stuttgart.

Dortmund took the lead at the Mercedes-Benz Arena on Tuesday in the fifth minute thanks to a Marco Reus strike.

Shortly after Dortmund fans had ended their boycott of the first 20 minutes in protest against ticket prices, Stuttgart levelled matters courtesy of a deflected effort from Lukas Rupp.

The protests continued minutes later with Dortmund supporters throwing tennis balls onto the pitch, forcing the game to be briefly stopped.

But Pierre-Emerick Aubameyang's 30th goal in 31 games and Henrikh Mkhitaryan's late effort made sure of a place in the last four as Dortmund ended Stuttgart's five-match winning streak.

"In the situation of the opponent, in these circumstances, we have made a perfect game," Tuchel said.

"We were dominant in the first half and prevented early counter-attacks.

"In the second half it was a little more open, we allowed three of four chances on the break.

"We could have made the third goal earlier, but we did so under difficult conditions."

Praising the prolific Aubameyang, Reus added: "It is extremely important for us that he is so dangerous in front of goal and makes the goals for us."