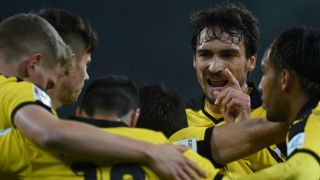 Borussia Dortmund manager Thomas Tuchel hailed the "mentality and charisma" of captain Mats Hummels during his team's 3-1 victory at Borussia Monchengladbach on Sunday.

Hummels played an integral role in breaking up the hosts' forays forward, allowing Dortmund's flair players to pick Gladbach apart on the counterattack, as the Bundesliga's top scorers brought up a half-century of league goals for the campaign and cut Bayern Munich's lead at the top of the table to eight points.

Marco Reus fired Tuchel's men in front prior to half-time before Henrikh Mkhitaryan added a second just after the break. Raffael reduced arrears for the home side but Ilkay Gundogan completed a comfortable victory with 15 minutes remaining.

Despite numerous impressive individual displays from his players, Tuchel chose to pick out Hummels for special mention.

"The key today was how successful we were at winning the ball back," said the Dortmund boss.

"We had a top captain on the pitch today. His mentality and charisma were superb.

"We are very excited about this victory against a difficult team. The counterattack in the second half was better."

Tuchel was also pleased to see Reus come through his first competitive outing since picking up an injury during the 4-1 victory over Eintracht Frankfurt on December 13.

"I am very happy about the way Marco Reus has come back from (the break)," said Tuchel. "He feels very free."