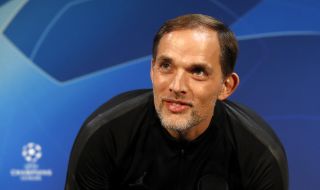 The two European heavyweights meet at the Parc des Princes on Wednesday night looking to lay down a marker in Group A.

Both sides, though, have been hit by their own selection worries, as PSG are without Brazil forward Neymar although he has seen his Champions League suspension reduced to two matches.

Despite the weight of expectation for an improvement on last season’s defeat to Manchester United in the last 16, German coach Tuchel is determined to take things one fixture at a time.

“Last year, we fell into a very strong group (with Liverpool and Napoli). It was a lot of pressure,” Tuchel said at a press conference.

“There is a lot to learn from a defeat. It was a very long phase after the defeat against Manchester United, but it is necessary to forget and look forward.

“The team have done that. We have a lot of changes, new players. But this is the first game, not a decisive match in the group.

“At the same time, it is a great opportunity to show you are capable of making a big team performance.

“Real Madrid are very strong, brave, they have won many times in the Champions League. I want to be aggressive, play fast.

“It’s our character to be active. I do not want to be too passive, we must take the ball to find solutions.”

Tuchel, though, insists there is no extra pressure being put on him by the club’s owners to make more inroads towards European glory this season.

“We never discussed with the president about that. My goal is to win tomorrow, that is clear. Then it is match after match,” he said.

Neymar’s punishment for social media comments made in the wake of PSG’s controversial 3-1 home defeat by Manchester United in March was reduced by the Court of Arbitration for Sport.

The former Barcelona forward was heavily linked with a summer move back to Spain, and was jeered by PSG supporters on his return to the team for Saturday’s 1-0 win over Strasbourg – which he secured with a stoppage-time overhead kick.

Tuchel wants to draw a line under the whole saga.

“Between me and Ney, everything is clear. The transfer market is finished, he is our player. It has never been a problem between me and my player,” the PSG coach said.

Real Madrid shrugged off their own injury concerns – Croatia midfielder Luka Modric the latest absentee – with a 3-2 home win over Levante.

“We are happy to start another competition. We know that it is a complicated opponent, what we have to do, but we are ready for that,” said Zidane, who revealed Eden Hazard could be involved after playing the last half-hour on Saturday.

“We are making a good start to the season, but of course it can be done better and we must improve at all levels.”

Karim Benzema scored twice against Levante, and Zidane believes the veteran France forward can again be a key player.

“He is scoring more, it is very decisive, but also he is a team player and I am more interested in that,” the Real Madrid coach said at a press conference.

“Maybe he will have a little more motivation because he is from Lyon, but I always love Benzema on my team.”