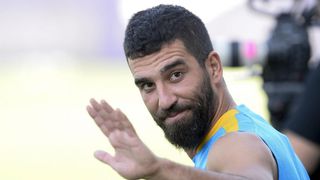 Luis Enrique has dismissed any suggestion that Barcelona will allow Arda Turan to go out on loan during the first half of the 2015-16 campaign.

Turan joined the Catalan giants from La Liga rivals Atletico Madrid earlier this month for an initial fee of €34million, putting pen to paper on a five-year deal.

However, the club cannot field any new signings until 2016 due to a transfer embargo imposed by FIFA.

That has led to speculation that the likes of Turan and Aleix Vidal could be sent out on loan to maintain match fitness, but Luis Enrique does not see that as a viable option.

"They cannot play until January and that does not favour us, but I want the new transfers around until then," he said.

"Messi is not in the US because he needs a vacation," he said. "His energy might seem eternal, but he needs a rest sometimes.

"I prefer not to tour, there are more problems than positives. It's a pleasure to come to countries such as the US but there are aspects such as jet lag which aren't ideal.

"We could be doing the same training sessions at home. Then again, it's nice to take part in friendly competitions and we'll try to prepare in training with these games in mind."