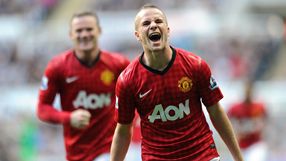 Liverpool's struggles continued when they were held to a goalless draw by Stoke City at Anfield and promoted Southampton needed a last-gasp goal from defender Jose Fonte, his second of the game, to rescue a 2-2 draw with Fulham.

Manchester United, desperate to bounce back from last weekend's surprise 3-2 home defeat by Spurs, made a high-tempo start at Newcastle and were rewarded in the eighth minute when defender Jonny Evans scored with a towering header from a corner.

Newcastle had a lucky escape four minutes later when keeper Steve Harper was robbed as he tried to dribble around Danny Welbeck on the edge of the penalty box and the striker slid the ball wide of an empty net.

Harper then dived full-length to deny man-of-the-match Wayne Rooney but left-back Patrice Evra made it 2-0 when he nodded in a corner at the near post.

"It was strange in a way because we played some good football and made a lot of good openings but those two goals both came from set pieces."

Newcastle raised their game in the second period and twice went close to pulling a goal back in the 50th minute.

Demba Ba shook the post with a header before goalkeeper David de Gea clawed away Papiss Cisse's follow-up attempt with the ball perilously close to going over the line.

"I think it was inconclusive," said Ferguson. "But I would have been disappointed if that had not been given to my team because most of the ball looked over the line."

Cleverley capped a sparkling show from Manchester United by curling a 25-metre shot into the top corner of Harper's net in the 71st minute.

Ferguson was unsure whether midfielder Cleverley meant to go for goal.

"I think it was a cross but Tom said it was a shot," added the Manchester United manager.

The win lifted Ferguson's team up to second in the table, level on 15 points with Manchester City. Chelsea are top on 19 after sweeping Norwich City aside 4-1 on Saturday.

Spurs, unbeaten in all competitions since the opening day of the season, broke through in the 58th minute at home to Villa when Jermain Defoe's shot was deflected into the corner of the net by Caulker.

The home team made sure of the points nine minutes later. Clint Dempsey set Lennon free on the right wing and he cut in to beat goalkeeper Brad Guzan with a low drive.

Spurs are fifth on 14 points and Villa are fifth from bottom.