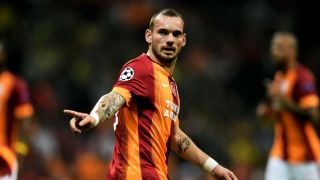 Galatasaray reclaimed the Turkish Super Lig title after Fenerbahce's 2-2 draw at Istanbul Basaksehir - in which they had four men sent off - confirmed a 20th crown for their fierce rivals.

Gala had done their part of the bargain on Sunday, defeating Besiktas 2-0 at home thanks to goals from Yasin Oztekin and Wesley Sneijder.

That victory moved them six points clear of Fener, who were unable to take the title race into the final day as they imploded on Monday.

The home side went two goals up through Mehmet Batdal, before the latter stages of the clash saw remarkable scenes.

Diego pulled one back for the visitors in the 81st minute, but Fener then saw Mehmet Topuz sent off three minutes later.

Substitute Pierre Webo struck an equaliser with two minutes of normal time remaining but in stoppage time, Bruno Alves conceded a penalty and was sent off, with team-mate Caner Erkin swiftly following for his protests.

The spot-kick was missed by Batdal, before Webo was dismissed right at the end as Fener ended the game with seven men and Gala were left to celebrate.

Besiktas' defeat means their hopes of qualifying for the UEFA Champions League are over and they must content themselves with a place in the Europa League.

Istanbul Basaksehir, Bursaspor and Trabzonspor remain in the hunt for the final qualification spot.

Kayseri Erciyesspor fared less well, giving up a 3-1 lead at Kasimpasa to draw 3-3.