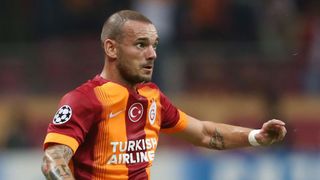 Wesley Sneijder took centre stage to keep Galatasaray on course for the Super Lig title with the only goal in their 1-0 win over Genclerbirligi.

Gala made it five league wins in-a-row against the mid-table outfit thanks to Sneijder's low shot from the edge of the area, but Ferhat Kaplan's poor attempt to save his effort caused controversy in Turkey.

Some of the league leaders' rivals questioned the 26-year-old for pulling out of a dive when he looked able to save Sneijder's effort, and even resulted in accusations of match-fixing aimed at the Genclerbirligi goalkeeper.

Fenerbahce remain three points behind their fierce rivals thanks to a 1-0 win over 10-man Mersin Idmanyurdu, but needed a last minute goal from  Emre Belozoglu to earn all three points.

With two matches of the season remaining the title fight could go right to the wire, but Besiktas are out of the hunt after being beaten 1-0 by Konyaspor - Gabriel Torje with the decisive goal.

Kayseri Erciyesspor's relegation had been confirmed before the Rizespor victory after their 1-0 defeat to Istanbul Basaksehir, but the fate of Karabukspor and Balikesirspor was not decided until Monday.

Balikesirspor must thought they had done enough to keep their hopes alive after a 4-2 win over Karabukspor, but Rizespor's win means they can no longer be caught.

Gaziantepspor saw their winless run extended to seven matches with a 2-0 defeat to Bursaspor, Eskisehirspor beat Trabzonspor 2-0 and Sivasspor secured their place in the division with a 1-1 draw against Kasimpasa.

Meanwhile, Osmanlispor joined Kayserispor in earning promotion to the Super Lig next season.