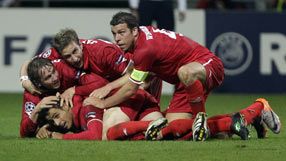 The Dutch league champions, who relied mainly on quick breaks, had goalkeeper Nikolay Mihaylov to thank for a clean sheet before going ahead after 81 minutes when Nacer Chadli's shot was deflected in.

Luuk de Jong then made sure of victory when he stooped low to head in a cross from Bryan Ruiz three minutes later.

"We were also a bit lucky that Werder did not score but I am delighted to have won."

Twente are third in Group A with five points from four games. Bottom club Werder have two while Tottenham Hotspur and Inter Milan lead the way on seven points apiece.

Werder, who had captain Torsten Frings sent off in the 75th minute for bringing down dangerman Ruiz on the edge of the box, squandered a dozen good opportunities and hit the post late in the first half.

"We had so many chances and we did not use them and after Torsten was sent off we were hit on the break and suddenly it was 2-0," said striker Claudio Pizarro.

"We gave it everything we had but if you do not score then you cannot expect to win."

Portuguese striker Hugo Almeida missed three golden opportunities, including a one-on-one with Mihaylov. Pizarro, who hit the woodwork, also wasted a hatful of chances for the hosts.

The Dutch made some quick breaks in the first half but seemed to lose their spark in the second, their best chance coming when Chadli rattled the post on the hour.

Chadli's goal, though, completely took the wind out of Werder's sails and De Jong struck from close range to seal Twente's first Champions League win in their debut season.