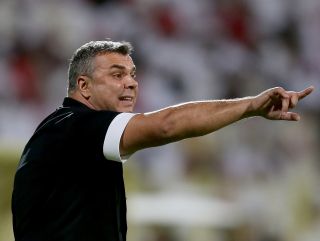 Leaders Al Ahli secured their 10th league win of the season with a comfortable 3-1 home victory over 10-man Al Dhafra on Friday to capitalise on Al Shabab's failure to collect three points a day earlier.

Cosmin Olaroiu's charges had all but ended the contest by half-time, as three goals in 15 minutes from Grafite, Ismaeel Al Hamadi and Hugo Viana established a 3-0 lead for the hosts.

Makhete Diop notched a consolation in the closing stages, but it failed to take the shine of a superb performance from Al Ahli, who earned a third consecutive triumph as Ali Abbas Yasin saw red for the visitors.

Their lead at the top of the table increased due to Al Shabab's draw at Bani Yas as both sides finished with 10 men.

The home side stole into the lead after just four minutes courtesy of Carlos Munoz's opener, and the score remained the same until the break.

Edgar Silva's 59th-minute penalty ensured Marcos Paqueta's side a share of the spoils, but Al Shabab were unable to build on the equaliser.

At the bottom end of the table, Al Shaab's miserable season continued with a 2-0 defeat at Al Wahda, with goals from Marco Estrada and Sebastian Tagliabue enough to secure victory for the home side, while the away side had Julius Wobay sent off in injury time.

Fellow strugglers Ajman secured a rare point with a 1-1 draw at Emirates, but Dubai - who sit one place outside of the relegation zone - suffered a heavy 5-1 defeat at Al Nasr, with Ibrahima Toure grabbing a double.