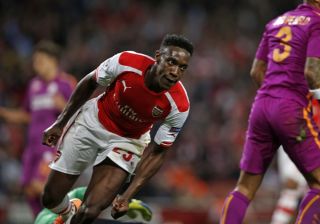 Arsenal manager Arsene Wenger, celebrating the 18th anniversary of his appointment in north London, was left to bask in a rampant first-half showing that left his side three goals to the good.

Welbeck was guilty of spurning two clear chances in his team's opening group defeat at Borussia Dortmund a fortnight ago, but the deadline-day signing exorcised those demons by putting the home side 2-0 up after half an hour.

The excellent Alexis Sanchez netted his first Champions League goal for two years in the 41st minute, leaving Welbeck to secure the match ball seven minutes after the restart.

Arsenal goalkeeper Wojciech Szczesny was sent off for a professional foul on Burak Yilmaz, who converted the resulting 63rd-minute penalty.

But there was little danger of Galatasaray putting a dampener on Wenger's evening as their winless run in England extended to 10 matches.

Mathieu Flamini, Santi Cazorla and Alexis came into the Arsenal XI as a result of midfield trio Mikel Arteta, Aaron Ramsey and Jack Wilshere sustaining injuries during Saturday's 1-1 draw against Tottenham. The latter was able to take a place on the bench despite his ankle complaint.

Galatasaray captain Selcuk Inan was a late withdrawal due to illness, meaning Yekta Kurtulus came into midfield as Cesare Prandelli plumped for a 3-5-2 formation that his side struggled to adapt to during a challenging opening period.

Visiting defender Felipe Melo made a vital interception to stop Welbeck getting on the end of Alexis' low 20th-minute cross, but the same combination put Arsenal ahead two minutes later.

Alexis cut in from the left flank and slid a pass through to Welbeck, who peeled off the back of Melo to slot home.

Galatasaray made matters worse in the 30th minute as an ill-judged back header from Aurelien Chedjou sold Melo short and Welbeck left the Brazilian in his wake to finish clinically.

A torrid evening for Melo might have ended early when he was only booked for a two-footed lunge on Alexis but, after a section of the Galatasaray support interrupted proceedings by throwing flares onto the pitch, it was the Chilean winger who ran riot - collecting Mesut Ozil's pass and scorching through the visitors' beleaguered defence to find the bottom corner.

Kurtulus made way for Hamit Altintop at half-time as Prandelli reverted to 4-4-2, but it did little to stem the tide.

Alex Oxlade-Chamberlain became the latest Arsenal player to torment Melo, forcing Dzemaili to clear from the goalmouth and the England midfielder was the architect when Welbeck completed his treble.

A beautifully judged pass through Alex Telles' legs was collected by Oxlade-Chamberlain's England team-mate, who dinked nonchalantly beyond Muslera.

Pandev's slide-rule pass caught the Arsenal back four flat-footed after an hour, and Szczesny darted out to be sent off as he was in last season's second-round loss to Bayern Munich at the Emirates Stadium.

Burak made no mistake, sending David Ospina the wrong way, although the replacement goalkeeper saved impressively from the goalscorer and Altintop in the final 10 minutes, before Cazorla saw an effort hacked off the line by Semih Kaya at the other end.

Galatasaray now have it all to do in Group D - this thrashing following their opening 1-1 draw at home to Anderlecht.