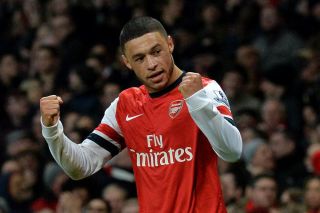 Arsenal trailed 2-0 at Goodison Park with seven minutes remaining but rescued a point thanks to late strikes from Aaron Ramsey and Olivier Giroud.

The fighting response from Wenger's side added to a last-gasp win over Crystal Palace on the opening day and gave them a boost ahead of the second leg of their UEFA Champions League play-off on Wednesday.

Their tie against Besiktas is evenly poised after a goalless first-leg draw in Turkey last week in which Arsenal star Ramsey was sent off for the first time in his club career.

Ramsey has scored in both of his Premier League appearances this season but will be banned for the return leg at the Emirates Stadium.

Alex Oxlade-Chamberlain saw his strike come back off the post in the dying stages of last week's clash but in truth an Arsenal victory would have been unfair on their opponents, who impressed, with frontman Demba Ba a constant threat.

"It [Everton draw] makes us strong in our belief and that's an important quality for Wednesday night," Wenger told Arsenal's official website.

"This game was very physical – let's prepare well and then I believe we have a good chance.

"The task is clear. We want to win the game at home. It's the Champions League so it will be a thriller because [Besiktas] are a good side."

World Cup winners Mesut Ozil and Per Mertesacker returned from breaks against Everton but there was no place for Lukas Podolski who could be on his way out of Arsenal before the transfer window closes.

Giroud suffered a late ankle injury at Goodison Park and Mikel Arteta (ankle) and Yaya Sanogo (hamstring) are also in doubt, while Theo Walcott (knee) and Kieran Gibbs (hamstring) continue to sit on the sidelines for Arsenal.

Besiktas are yet to begin their league season with their first clash coming at Mersin Idmanyurdu on Saturday.

They will hope to head into that in high spirits and are unbeaten in their three competitive matches so far this season.

First came a 5-2 aggregate win over Feyenoord in the Champions League's third qualifying round in which Ba netted a second-leg hat-trick.

And they showed enough in the first-leg draw to suggest they can threaten Arsenal in spells.

Mustafa Pektemek and Oguzhan Ozyakup both worked exceptionally hard and the sheer presence of Ba will give Arsenal defenders Mertesacker and Calum Chambers something to think about.