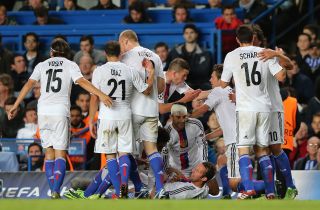 Six years to the day after a 1-1 draw with Rosenborg that represented the final game of Mourinho's first spell in charge at Stamford Bridge, Chelsea were stunned by second-half goals from Mohamed Salah and Marco Streller.

Oscar fired the hosts ahead in the 45th minute in the Group E clash with his sixth goal in seven Champions League outings and the Brazilian also hit the bar prior to Salah’s classy left-footed leveller.

That goal prompted Chelsea to throw men forward, yet it was Basel - always dangerous on the break - who struck again when Streller beat Petr Cech with a near-post header from a corner.

Willian was handed his Chelsea debut and Marco van Ginkel a first start as Mourinho made five changes from the side beaten 1-0 by Everton at the weekend.

Basel recalled a host of players after fielding a weakened side for their Schweizer Pokal victory against Munsingen.

Mourinho's men unsurprisingly started the game on the front foot, albeit without creating any clear-cut opportunities.

There was a scare for Basel goalkeeper Yann Sommer in the 15th minute when he fumbled a corner from the left, but a free-kick was swiftly awarded in his favour.

After Eden Hazard had spurned a rare clear sighting of goal for Chelsea following good work from Samuel Eto'o, Salah also proved wasteful when cutting in from the right and curling a shot over the bar.

Despite dominating possession and the corner count, the hosts remained frustrated as half-time approached.

However, Chelsea were lifted on the stroke of the interval as Oscar popped up with a timely goal.

David Luiz set the attack in motion by stepping into midfield and Oscar latched on to a delicate throughball from Frank Lampard to find the bottom-left corner with a first-time shot on the turn.

Streller was close to connecting with a left-wing cross early in the second half before Oscar struck the bar at the other end with a tremendous effort from just outside the area.

Hazard failed to hit the target once again either side of Branislav Ivanovic twice threatening from set-pieces.

Chelsea were then punished for not extending their lead when a cross from the left broke via Streller to Salah, who emulated Oscar by only requiring one touch to find the net.

Although Chelsea poured forward in search of a late winner, it was Basel who finished the stronger and their encouraging play gained reward as Streller shocked the home crowd.