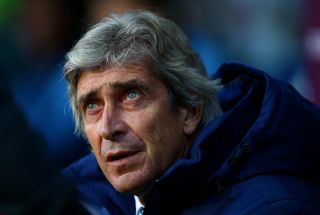 City have claimed just one point from their first two Group E fixtures, following up a 1-0 loss at Bayern Munich with a 1-1 home draw against Roma last time out.

The Premier League champions have struggled in Europe's premier club competition in recent years, failing to get past the round of 16 in the last three seasons.

They have also been overshadowed so far this term on the domestic scene by Chelsea, who are five points clear of their rivals at the top of the Premier League table.

Failure to win the league and another short-lived Champions League campaign could spell trouble for Pellegrini, but the Chilean is far from flustered.

Back-to-back fixtures against the Russian outfit represent an ideal chance for City to return to continental form and ahead of Tuesday's clash, Pellegrini acknowledged: "They are two very important games.

"We need to win both of them, starting in Russia."

Tuesday's match will be played behind closed doors after CSKA were hit with a sanction by UEFA following issues of racism and crowd trouble.

Pellegrini, though - while acknowledging the reasons for the punishment - feels that could make things even harder for his team.

"I always think in a positive way [though]. I am sure it's a very important game but the pressure I feel is not an external pressure from the owners or the fans or the media.

"The best way to work is to feel you have pressure in every game. I trust a lot that we are going to qualify.

"If we win our next four games, maybe we can be first [in Group E] but the most important thing is to qualify."

City have hit their stride in recent weeks domestically, with a 7-0 League Cup thrashing of Sheffield Wednesday setting the tone for a busy month in front of goal.

A 4-2 win at Hull City followed, while they triumphed 2-0 at Aston Villa after their Roma draw.

Argentina striker Sergio Aguero was the star of the show on Saturday as he netted four times in an excellent 4-1 home win over Tottenham.

He missed a penalty but scored two others from the spot  in an encouraging display for Pellegrini, while goalkeeper Joe Hart saved a spot-kick and looked close to his best.

Frank Lampard (leg) will not travel to Russia after being taken off on a stretcher in the weekend win, while Samir Nasri (groin) and Eliaquim Mangala (muscle problem) are also set to miss.

City and CSKA met in last year's group stage of the Champions League, with the English side winning 2-1 on the road.

They then won 5-2 at the Etihad Stadium - Aguero scoring twice in both.

CSKA, who have lost both of their fixtures to sit bottom in Group E, are second in the Russian Premier League and thrashed fourth-placed Kuban Krasnodar 6-0 on Saturday.

Ahmed Musa and Seydou Doumbia both netted doubles in that win and will be expected to once again lead their challenge.