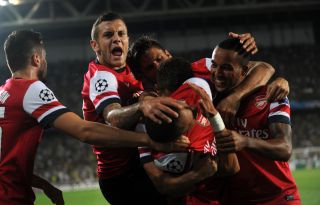 The Premier League side came into the first leg of their UEFA Champions League play-off tie amid mounting fan discontent due to inactivity in the transfer market and their 3-1 home defeat to Aston Villa on Saturday.

However, Wenger's men responded in style at Sukru Saracoglu by scoring three away goals to all-but ensure their place in the group stages of Europe's premier club competition for the 16th season in a row.

Arsenal were in command from the off in Istanbul but it took them until six minutes after half-time to finally take a deserved lead through left-back Kieran Gibbs, who converted Aaron Ramsey's cross at the back post.

Ramsey then doubled the visitors' advantage himself with a superb effort just after the hour mark. The Wales international drove at the Fenerbahce defence before unleashing a low shot from 20 yards that squirmed under keeper Volkan Demirel.

And Olivier Giroud added gloss to the scoreline from the penalty spot with 14 minutes to play after Theo Walcott was brought down in the area, leaving the Turkish side with a mountain to climb ahead of next week's second leg at the Emirates Stadium.

Another side to seal an impressive away victory were Swiss champions Basel, who ran out 4-2 victors at Ludogorets.

The match then stayed all square until after the break when Ludogorets midfielder Ivan Stoyanov gave the hosts the lead, but Basel then responded in style, with Salah's second of the game, a strike from Giovanni Sio and a late Fabian Schaar penalty putting them firmly in charge of the tie.

Schalke have endured a nightmare start to the new Bundesliga campaign and their chances of reaching the group stages of the Champions League are in the balance after they were held to a 1-1 home draw by PAOK.

The German side dominated the vast majority of the match at the Veltins-Arena and Jefferson Farfan put them in front midway through the first half. However, Miroslav Stoch grabbed an equaliser and an all-important away goal for the Greek visitors 17 minutes from time.

Elsewhere on Wednesday, Austria Vienna put themselves in the driving seat for qualification by nicking a 2-0 win away at Dinamo Zagreb.

The Austrian champions soaked up pressure from Dinamo throughout the game and got their noses in front on 68 minutes through Marin Leovac, before striker Marko Stankovic sealed the victory seven minutes later.

Meanwhile, the tie between Steaua Bucharest and Legia Warsaw remains too close to call after the two sides played out a 1-1 draw in the Romanian capital.

Federico Piovaccari put the home side ahead with a smart finish in the first half, before Jakub Kosecki grabbed a crucial away goal for the visitors eight minutes after the break.