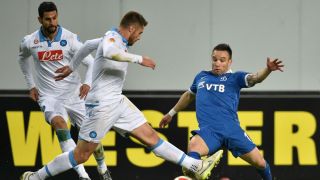 Having won 3-1 in Naples last week, Rafael Benitez's men saw out the job in Thursday's last-16 second leg at the Arena Khimki.

Dries Mertens and Jose Callejon hit the woodwork inside the opening quarter of an hour, which was as close as the Serie A side came to increasing their advantage.

The only thing missing from an end-to-end opening period was a goal, but Napoli were relieved to see two Dynamo efforts ruled out for offside - one of which for Christopher Samba may have been marginally onside.

With their lead still intact, Napoli appeared more content to sit back after the break and Kevin Kuranyi wasted a good chance for Dynamo to set up a nervy ending.

Napoli's progression will be a relief to Benitez, who had questioned his side's ability to challenge on three fronts following last weekend's 2-0 loss to Verona.

The Spaniard saw his side let Dynamo off the hook early on when Christian Maggio inexplicably failed to make clean contact with a header from Manolo Gabbiadini's corner when unmarked eight yards out.

Mertens was then desperately unlucky not to open the scoring when his dipping effort from 25 yards beat goalkeeper Vladimir Gabulov, but crashed off the crossbar.

The visitors' pressure continued as Gabbiadini threaded a pass through to Callejon on the right of area and the Spaniard's placed effort across the goalkeeper hit the outside of the post.

Having rode their luck Dynamo thought they had taken the lead when Samba headed in Mathieu Valbuena's free-kick, only for the centre-back to be flagged for offside - with replays suggesting he may have been on.

Dynamo had another goal chalked off when Aleksandr Kokorin chested past Mariano Andujar, but the striker was clearly in an offside position.

The hosts ended the half well and continued to probe after the break, with only a fine block from Raul Albiol denying Kokorin an effort on target after good link-up play with Kuranyi.

Albiol's defensive partner Miguel Britos then made a crucial interception from Alexander Buttner's cross with Kokorin ready to pounce.

Napoli remained a threat, though, and Gonzalo Higuain - who scored a hat-trick in the first leg - ran on to a route one pass from Andujar before rounding the on-rushing Gabulov and chipping over the crossbar from the edge of the box.

Kuranyi missed a great chance to bring Dynamo within one when he headed William Vainqueur's right-side cross over from eight yards with 20 minutes remaining.

With time running out Napoli controlled possession well and they could have stolen a win on the night when Callejon shot tamely at the goalkeeper having been played in by Marek Hamsik.