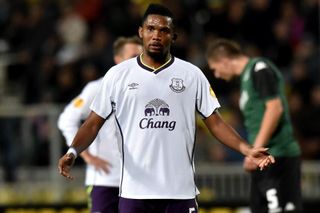 Having earned a morale-boosting 1-1 draw at local rivals Liverpool last Saturday, Roberto Martinez's side headed to Russia in confident mood.

But they were outplayed for much of the Group H encounter at the Stadion Kuban as the hosts built on their Group H opening 1-1 draw with Lille with a strong display.

A first-half strike from Brazilian striker Ari looked as though it would prove to be the difference between the two sides as Everton struggled to make an impression.

But Eto'o - like Phil Jagielka at Anfield five days' previously - rescued a point late on, stealing in to convert Leighton Baines' teasing delivery.

The draw moves Everton onto four points, while Krasnodar, who also led against Lille, are left to reflect on another missed opportunity ahead of meetings with Wolfsburg.

Krasnodar started the game brightly and went close to opening the scoring in the 17th minute when Marat Izmailov's low drive from the edge of the area forced Everton goalkeeper Tim Howard into a strong save.

Izamilov then brought the United States shot-stopper into action again as the hosts dominated the early stages without being troubled defensively by Martinez's men.

Everton finally did threaten the Krasnodar goal in the 22nd minute.

Aiden McGeady, a player with experience of Russia having spent time at Spartak Moscow, saw an effort turned round the post by former team-mate and veteran keeper Andriy Dykan, who soon produced another stop to keep out Gareth Barry's curling strike.

John Stones was the next to waste a good opportunity by heading a McGeady cross wide, and the visitors were punished for their profligacy by Ari in the 43rd minute, the 28-year-old firing a volley beyond Howard after Mauricio Pereyra had flicked Odil Ahmedov's clever lofted ball into his path.

Striker Romelu Lukaku was brought on for Christian Atsu after the half-time interval but his introduction failed to produce an immediate impact.

Instead it was Krasnodar that almost added a second, substitute Wanderson jinking his way into the box before clipping a shot against the crossbar.

Unsurprisingly Oleg Kononov's men began to sit deeper in the closing stages as Krasnodar sought to protect their slender advantage.

But they could not see out what would have been a famous victory, Eto'o displaying his considerable prowess in front of goal to turn home Baines' right-wing cross and rescue a share of the spoils.