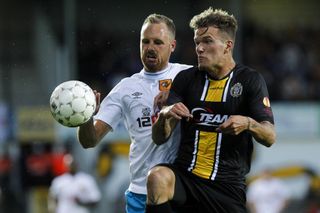 A scuffed clearance from the 32-year-old goalkeeper just before the hour went straight to Hans Vanaken, who produced a cool finish to hand his side victory in the first leg of the play-off tie.

Despite a bright start, Steve Bruce's side failed to breach the Belgian Cup winners, with Yannick Sagbo wasting their best chance early on.

The visitors will head into the return leg at the KC stadium needing at least a two-goal margin to keep their dream of qualifying for the group stages alive.

Hull, who made nine changes from their weekend win over QPR, enjoyed a lively start to proceedings in Belgium and should have taken the lead after seven minutes.

Some great work from Maynor Figueroa allowed Sagbo to break free of his man in the six-yard box, only for the Ivorian's scuffed shot to be hacked clear by Denis Odoi.

Robbie Brady and David Meyler both tried their luck from distance before the 10-minute mark, but failed to really test Davino Verhulst in the Lokeren goal.

Roared on by 1,000 travelling fans, Hull continued to dominate possession in the middle of the park, but lacked the incisiveness needed to get behind a stubborn home defence.

The hosts themselves struggled to find any cohesion in the final third, with their best chance of the half coming 15 minutes before the break when Nill De Pauw lashed a volley over from distance.

But Hull remained the better side, with Sagbo's close-range header missing the target five minutes later and Meyler firing wide from 20 yards just before half-time.

The hosts nearly punished their wastefulness three minutes after the restart, with De Pauw's powerful effort from the edge of the box forcing a fine save from McGregor.

But the Scot turned from hero to villain 10 minutes later, scuffing a pass on the edge of the area straight into the path of Vanaken, who calmly rounded the keeper and rolled into the net.

Junior Dutra fired wide and De Pauw forced a smart save from McGregor within three minutes of each other as the hosts looked to build on their momentum.

Hull threw on Nikica Jelavic and Tom Ince in a bid to find a precious away goal, a move that injected some welcome pace into their front line.

Ince forced a decent save from Verhulst 12 minutes from time with a low drive, and the keeper was on hand to deny Meyler inside the last 10 minutes to secure the victory, Lokeren's first over English opposition.