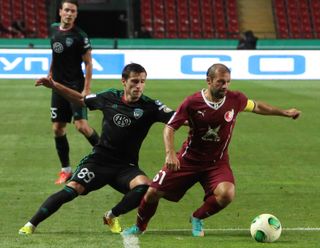 Rubin, who reached the quarter-finals of last year’s competition, eased into the group stage thanks to goals from Aleksandr Prudnikov, Roman Eremenko and Sardar Azmoun in a 3-0 victory.

Jermain Defoe was the key man for Tottenham in their thrashing of Dinamo Zagreb, the England international scoring a brace in a 3-0 (8-0 agg) win.

Swansea also made it through comfortably despite a 2-1 loss to Petrolul of Romania - Michael Laudrup’s men making it into the group stage 6-3 on aggregate.

AZ and Atromitos will have to wait a little longer to discover their fate after their game at the AFAS Stadion was abandoned due to a fire at the stadium. The Greek side were 1-0 ahead after losing the first leg 3-1.

Colombian Carlos Bacca scored a double in Sevilla's 5-0 procession past Slask - a result which clinched a 9-1 aggregate victory.

Sevilla's city rivals Real Betis thrashed Jablonec 6-0 (8-1 agg), but Fiorentina progressed by a much narrower margin, with the Italian side going through on away goals (2-2 agg) following a 1-0 home loss to Grasshoppers.

Portuguese side Braga were victims of one of the bigger shocks of the round, though, as Jesualdo Ferreira's men succumbed to a 2-0 (2-1 agg) defeat after extra time at the hands of Pandurii, Alexandru Ciucur scoring the crucial goal for the Romanian side.

Feyenoord's poor start to the season continued with a 2-1 (3-1 agg) defeat at home to Kuban Krasnodar, with Ivelin Popov and Gheorghe Bucur scoring for the Russians.

Dynamo Kiev breezed into the next stage as they hammered Aktobe of Kazakhstan 5-1 (8-3 agg).

Stuttgart were unable to overturn a 2-1 first-leg deficit as they could only manage a 2-2 draw with Rijeka, the Croatian side prevailing 4-3 on aggregate thanks to an injury-time goal from Goran Mujanovic.

However, there was better news for Eintracht Frankfurt who were competing in Europe for the first time in seven years, as Alexander Meier and Takashi Inui scored in a 2-1 win to clinch a 4-1 aggregate triumph over Qarabag.

Udinese crashed out to Czech club Slovan Liberec – who led 3-1 from the first leg – after a 1-1 draw at the Stadion u Nisy.

It was a difficult day for French sides, with Saint-Etienne eliminated 5-3 on aggregate following a 1-0 home defeat to Esbjerg of Denmark.

Meanwhile, Nice’s 1-0 win over Apollon was not enough to see them through as the Cypriot side progressed 2-1 on aggregate.

Maccabi Haifa progressed 3-1 on aggregate thanks to1-1 draw with Astra, Rapid Vienna cruised past Dila 3-0 (4-0 agg) and Elfsborg made It through after beating Nordsjaelland 1-0 (2-1 agg).

A late goal from Jens Naessens gave Zulte Waregem a 2-1 (3-2 agg) win over APOEL in Nicosia, and Skenderbeu won a dramatic game with Chornomorets Odessa 7-6 on penalties after striker Andi Riba’s goal had levelled the tie at 1-1 on aggregate.