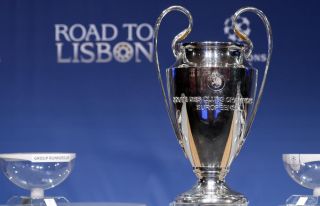 Under current regulations, the seedings for Europe's premier club competition are based on a club coefficient rating, which takes into account each team's performance in European football over the past five years and the strength of their domestic league.

However, under planned changes revealed in a statement to Perform, UEFA is considering tweaking the system so that the winner of the previous season's tournament would be the top-seeded team, with the domestic champions of the seven top-ranked leagues allocated the remainder of the spots in pot one.

"This proposal will be put forward to the UEFA Executive Committee at one of its upcoming meetings," the statement continued.

The plans would reward the likes of Manchester City, Juventus and Ajax, who have regularly won their respective domestic leagues in recent years only to be placed in a lower pot and, as a consequence, a more difficult group due to their past performance in continental competition.

The prospective changes would instead heighten the chances of the likes of Barcelona, Arsenal and Chelsea - all of whom were placed in pot 1 this season despite failing to win their domestic league title - being drawn in lower pots and facing a potentially tougher group-stage draw.