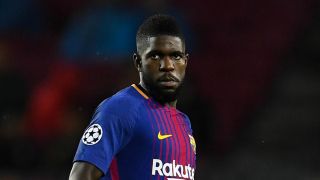 Samuel Umtiti took part in Barcelona's training session on Tuesday as the centre-back continues his recovery from a hamstring injury.

The France international has not played since suffering the problem in a 2-2 home draw against Celta Vigo on December 2.

Umtiti was expected to miss up to eight weeks of action, but enjoyed a return to the training ground sooner than might have been expected.

Ernesto Valverde's side are next in action on Thursday at home to Celta in the second leg of their last-16 Copa del Rey tie – the first leg having ended 1-1 – but Umtiti is not expected to be available.

Barca's new record signing Philippe Coutinho – out for three weeks with a thigh injury – was also present as the former Liverpool attacker met his new team-mates.

Jorge Sampaoli was a visitor at Tuesday's session, speaking to Valverde and overseeing Argentina internationals Lionel Messi and Javier Mascherano.