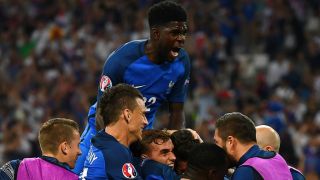 France defender Samuel Umtiti will have "no problem" facing Cristiano Ronaldo in Sunday's Euro 2016 final, his brother Yannick has said.

The 22-year-old put in an accomplished display at the heart of the defence as the host nation saw off Germany 2-0 in the semi-final to set up a showdown with Portugal at Stade de France.

Umtiti agreed a transfer from Lyon to Barcelona last month after impressing for the last five years in Ligue 1, and is set to conclude the move once the tournament has come to an end.

And his older brother believes the chance to go up against Ronaldo on Sunday will be a useful learning curve for matches against Real Madrid next season, should he get the nod for the final.

"There's no problem having to defend against Cristiano," he told RAC1. "It will be magnificent to play against him. It will give Sam an idea of what he will encounter in the Clasico.

"Sam has fulfilled a dream. It's been a special week, joining Barca and playing in the semi-finals of the Euros. It's fantastic. We are really pleased to see Sam so happy. That's all we wanted. His dream was to play for Barca and he's completed it.

"He is ready to take on the pressure, and it won't be a problem for him or the family. He has big personality, is a good professional and he wants to improve and play with the best. He wants to win titles."

Yannick is hopeful that Didier Deschamps will have been impressed enough to keep faith with Umtiti in the starting line-up.

"I hope he will start again. For him it wouldn't be a problem. He's a person that knows what he has to do and how he has to prepare. I'm not worried about that."