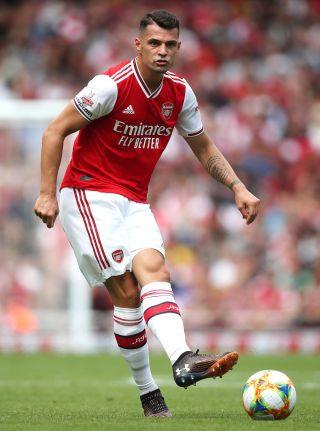 Arsenal manager Unai Emery has refused to confirm whether Granit Xhaka will remain as club captain.

The Swiss midfielder reacted angrily towards supporters as he was substituted during their 2-2 draw with Crystal Palace at the Emirates on Sunday.

When asked if a decision had been made on the captaincy, Emery said: “At the moment I am not speaking and I don’t want to think about that.”

Emery then added: “It is not easy for him and for the team. He is now devastated, sad, we spoke yesterday and Sunday night also and this morning.

“He trained normally with the group but he is devastated and sad about the situation.”

Xhaka is not in Arsenal’s squad for Wednesday’s Carabao Cup clash with Liverpool, but Emery suggests that was not going to be the case as he shuffles his pack for cup competition.

And the Gunners manager believes that Xhaka needs to apologise.

Emery added: “Yes (he should apologise) we make mistakes, we need to apologise and we suggested for him to do that.

“Now we are looking, seeing he is devastated and the first thing is to recover him. We need our family, friends and supporters to support us, love us.

“He is not feeling that with the supporters. But we are speaking with him ‘first, be calm. Be close to your family and be close to us because we are your family’.

“His commitment with the club is great every time, he wants to help. His behaviour was perfect in training with the group and with the club.

“Really, he knows he was wrong and he feels inside very deep. But it is normal, like a human, every player needs the supporters to support them and the team.”

Xhaka was chosen as captain in a blind ballot by the squad and Emery insists the midfielder has the qualities to carry out the role.

“He has the values, the respect in the dressing room, experience. He is captain of his national team and has the condition to be the captain,” the Spaniard said.

“I decided that, the players respect that, and he was wrong on Sunday and it was not the response of a captain.

“Individual circumstances like Sunday are becoming because as a team we need to improve and be more comfortable to transmit to the supporters and show them a better performance.”