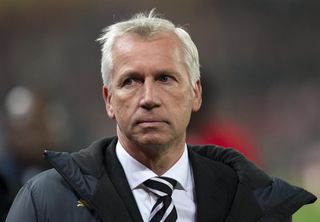 Pardew has been under intense pressure after a dismal end to last season continued into the new campaign, with the club only kept off the bottom of the Premier League by virtue of goals scored.

Fan protests have already been staged at St James' Park aimed at getting rid of Pardew and owner Mike Ashley - with the pair often accused of lacking ambition by sections of the club's support.

While Pardew accepts his side's poor performances will inevitably attract criticism, he feels a degree of worry at the anger seeping into his personal life.

"I've had one or two interactions where fans have made their point and I've got no problem with that," he said.

"I've also had two or three fans wishing me to come through it and I appreciate that.

"My family and friends worry me a little bit, because it's started going past football media a little bit at times. That's not nice."

Since a 4-1 win at Hull City in March, Newcastle have won just four times in all competitions - with the malaise continuing into Monday's 1-0 defeat against Stoke City.

However, Pardew is confident he has the backing of the club's hierarchy and dismissed suggestions he remains in his role due to Ashley's stubbornness.

"It's getting lost in the wash a little bit that I'm here out of arrogance or Mike's being stubborn about it to annoy people," Pardew continued.

"We're not. We're just trying to get what is right for the team and it's obvious that the team isn't functioning very well at the moment.

"I spoke to Mike and the chief executive and the message is very much 'how can we support you?' I would not expect any different, even if they were thinking different privately. They have been very solid and I appreciate that.

"I love this football club. The players are feeling a little bit of the stress and the heat that is upon them. They are a young group and I need to help them. I will do that until such point where it comes that I can’t help them any more."