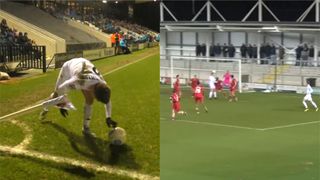 Strong winds created a goal and caused havoc with corners as National League clubs AFC Fylde and Hartlepool had to play in what they described as “unique” conditions.

Video shows Fylde player Nick Haughton struggling to keep the ball in place for a corner, before his side later pulled ahead thanks to the powerful gusts diverting a deflected cross onto the head of striker Danny Rowe.

“It was just a cross that was blocked and the wind picked up, and I just had to get a header on it,” Rowe said after the game.

While the wind was fortuitous for Rowe, his team-mate Haughton had to apologise to his club’s groundsman after he had to dig a trench with his foot to keep the ball in place for a corner.

The club’s manager Dave Challinor said the conditions were “unique” and that he has “never played in anything” like it.

“You hope it’s not decided by the wind, but that’s what happened,” he said.

“It was all over the place, if it was going in one direction it would be easier, but it just went everywhere, and everyone on that pitch did a good job.”

Rowe added: “You couldn’t judge anything, it was a tough night whether you were a striker or a defender.”

Fylde won the match 4-2, taking them to fourth in the National League table, while Hartlepool dropped to 13th.

The blustering conditions follow comments from Jurgen Klopp earlier this month, who said after his Liverpool side’s goalless draw with Everton that “the weather circumstances didn’t help for football in general” and made specific reference to the wind.