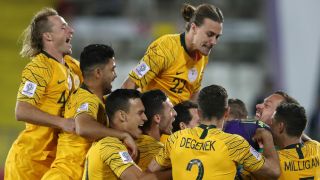 Graham Arnold plans to break with his tradition of naming his starting line-up the night before a match when Australia face United Arab Emirates in the Asian Cup quarter-final.

The Socceroos take on the hosts on Friday in Al Ain, hoping to become the first reigning champions to reach the last four of the tournament since Japan in 2007.

They have been made to work in their run to the last eight, recovering from an opening defeat to Jordan to progress to the round of 16, where they defeated Uzbekistan on penalties after a 0-0 draw.

Head coach Arnold believes that spot-kick success has instilled some confidence in his side and he hopes his players can tap into their renewed belief.

He intends to inform the squad of the team to face UAE on the morning of the match, rather than the day before, so they have sufficient time to prove their fitness.

"We've recovered very well from the performance against Uzbekistan, the extra time and the penalty shoot-out, and the boys are in fantastic headspace," he said.

The team are running through their final session before our #AsianCup2019 Quarter Final against UAE #UAEvAUS#TogetherAsOnepic.twitter.com/nMnMgQrCxx— Socceroos (@Socceroos) January 24, 2019

"Probably playing those extra minutes has built a lot of confidence and belief within the group. When we look back at that performance, we know there's a lot of improvement left in us and I expect a great performance [on Friday].

"Normally, I name the team the night – or the last training session – before, but for this one I decided not to. It's really around the side of recovery. We only played three days ago and I want to see the fresh players training today and I want to see the mentality and the freshness and I'll make the decision on the line-up tomorrow [Friday] morning."

Tom Rogic will miss the game through suspension, while UAE will be without defender Khalifa Mubarak, who broke his leg in the last-16 win over Kyrgyzstan.

Head coach Alberto Zaccheroni admits his side will need to show some improvement in their form, regardless of injuries, if they are to progress.

"We seemed to struggle with long balls and crosses, and we also had one or two chances to score and secure the game, but we didn't convert those opportunities," he said of their 3-2 win after extra time in the last round.

"We will try to correct all the things that we believe were less positive between now and the quarter-finals."

Only three players - Ali Daei (14), Lee Dong-gook (10) and Naohiro Takahara (nine) - have scored more Asian Cup goals than Mabkhout. He will likely need to add to his tally of eight if the hosts are to go through.

Having managed 50 minutes as a substitute against Uzbekistan, Hertha Berlin's Leckie looks ready to start after recovering from a hamstring problem. With Rogic banned, he could well be needed.

- This will be the second Asian Cup meeting between United Arab Emirates and Australia, with their first encounter in 2015. UAE lost 2-0 to the eventual champions in the semi-finals.
- Two of the last three Asian Cups have failed to see the hosts appear in the semi-finals (2007 and 2011), with opponents Australia doing so in 2015 and going on to win the tournament.
- UAE have both scored and conceded in four of their last five Asian Cup contests, scoring 10 and conceding six in total.
- Australia have failed to score in two of their four games at the 2019 Asian Cup, as many blanks as in their previous 16 games in the competition.