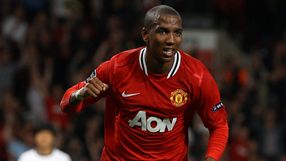 The English champions blew a two-goal lead to trail 3-2 after Basel capitalised on a shaky United defence to stand on the verge of a famous upset and what would have been only a second home defeat in 33 Champions League games for the hosts.

Two Danny Welbeck goals in two minutes had given United a comfortable lead by the 17th minute and they looked to be cruising before Basel hit back with two goals in quick succession from Fabian Frei and Alexander Frei.

The latter then converted a 76th-minute penalty after some woeful United defending to turn the match completely on its head but they were denied outright top spot in the group when Young headed home in the 90th minute.

United boss Sir Alex Ferguson blamed carelessness from the back four, who had been tested throughout the first half but let off the hook by poor Basel finishing and who had been thrown together because of injuries to this season's other regulars.

"In many ways it was a welcome to European football for them, they were very lax for most parts of the game I thought," Ferguson told a news conference.

"The attacking part was very good at times, but there was a carelessness about us, they could really have scored three goals in the first half."

Up front United had no problems, with Ferguson's decision to field Welbeck instead of the experienced Michael Owen and Dimitar Berbatov looking inspired after the 20-year-old's quick-fire double had put United in command.

Fabio crossed from the right to Ryan Giggs in the middle who teed the ball up for Welbeck to send a scuffed shot in off the near post in the 16th minute.

Fans were still celebrating that goal when Giggs combined again with Welbeck, standing in for the injured Wayne Rooney and Javier Hernandez, to double the score with a first-time finish.

The tables were turned in the second half when Basel's two Freis scored quickly, the first after a rebound and the second with a textbook header, to set up a mouthwatering finale.

The game tipped in Basel's favour when Antonio Valencia's clumsy challenge brought down Marco Streller for a penalty, a decision which Ferguson later branded "poor."

Facing his team's own noisy fans, Alexander Frei fired the spot-kick confidently into the net to put his side on the verge of a huge upset.

Basel coach Thorsten Fink, an 80th minute Bayern Munich substitute in the 1999 Champions League final when United scored twice in stoppage-time to snatch a 2-1 victory, knew all too well about the hosts' never-say-die attitude.

He was robbed of glory again when Young got on the end of an inch-perfect Nani cross from the right to score on his Champions League debut and rescue a draw.

Basel fans partied after the final whistle as if their team had won and Fink said the late United sting was nothing like the one in 1999.

"1999 was negative but this is a positive experience," he told a n