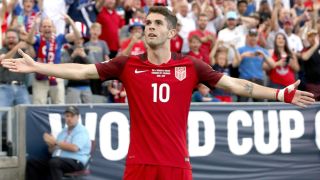 Teenage sensation Christian Pulisic scored a goal and set up another as the United States moved a step closer to automatic qualification for the 2018 World Cup thanks to a crushing 4-0 win over Panama.

Pressure was on USA to claim all three points in Friday's crucial qualifier, with the Americans occupying fourth position before kick-off – only enough for an inter-confederation play-off berth.

But Pulisic and his team-mates delivered in Orlando, scoring three first-half goals, to lift the CONCACAF Gold Cup champions above Panama and into third position heading into the final matchday of 'Hexagonal' qualifying.

Borussia Dortmund starlet Pulisic opened the scoring in the eighth minute with a stunning finish from a tight angle before the 19-year-old provided the assist for Jozy Altidore 11 minutes later.

Altidore's Panenka penalty in the 43rd minute ended the match as a contest after Bobby Wood was fouled inside the area before the latter completed the scoring past the hour-mark.

USA are third in the standings with 12 points after nine matches, two clear of Panama ahead of next week's trip to Trinidad and Tobago.

The past four meetings between the two nations ended 1-1 following matchups in qualifying and the CONCACAF Gold Cup but USA were in complete control from the outset as Panama were camped in their own half early in Orlando.

There was one early warning sign from Panama via Gabriel Torres but the Americans were in control and eventually broke the deadlock with less than 10 minutes played.

Pulisic – deployed in a more central role – cut through Panama's defence and rounded Penedo before coolly finishing from an acute angle – his eighth international goal in 19 matches.

The golden boy of American football was in the thick of the action again, this time teeing up Toronto FC star Altidore for USA's second in the 19th minute.

Pulisic broke free out wide and rolled an inch-perfect delivery across the six-yard box and straight to Altidore at the back post for a simple side-footed finish.

That threatened to open the floodgates as Wood found himself in a one-v-one situation three minutes later but he fired his shot straight at Penedo.

Such was USA's dominance, Panama made a substitution in the 26th minute. Coach Hernan Gomez seeing enough as he withdrew Edgar Barcenas for Armando Cooper.

Panama enjoyed some more time on the ball but it left them exposed at the back as the Americans were presented with plenty of space, and Altidore wasted the chance to net his second after shooting straight at Penedo.

It mattered little though as Wood earned a penalty moments later and Altidore stepped up to convert two minutes before half-time, taking his tally to 41 USA goals – third behind Dempsey and Landon Donovan.

Leading by three goals, the second half did not have the same intensity but the Americans managed to add a fourth goal in the 63rd minute.

Having sprayed a shot wide earlier, Hamburg forward Wood received the ball close to goal before turning and shooting past Penedo.