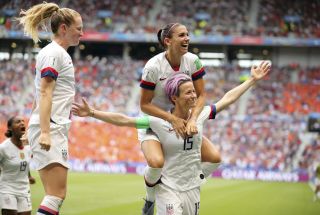 The United States won the Women’s World Cup for a fourth time, beating Holland 2-0 in Lyon.

After being thwarted by a series of excellent Sari Van Veenendaal saves in the first half, the US took the lead in the 61st minute when Megan Rapinoe coolly converted a penalty awarded via VAR.

Rose Lavelle doubled the lead eight minutes later as the holders made sure of a successful defence of the title.

They become the second team to win the competition twice in a row, matching the feat of 2003 and 2007 champions Germany.

Both US successes have been achieved under the management of Jill Ellis, who was born in England.