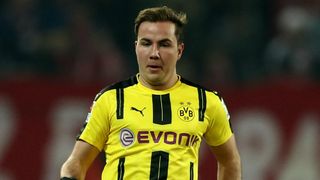 Peter Bosz's side, beaten by fourth-tier Rot-Weiss Essen by the same scoreline in their opening friendly, deservedly trailed to Shinzo Koroki's 24th-minute opener in Saitama.

A quick-fire double from half-time substitute Emre Mor – brought on along with Gotze, making his first appearance since January – put the visitors ahead going into the final 10 minutes.

It looked as though Wataru Endo had secured a hard-earned draw for the eighth-placed J.League side, but his misplaced header allowed Schurrle to settle it at the death.

The Reds were denied a penalty when Rafael Silva took a tumble in the box following a challenge from Marc Bartra, with the referee unmoved.

Bartra came close to opening the scoring with a 14th-minute header that struck the underside of the crossbar, while Schurrle curled narrowly off target soon after.

Yuki Muto hit Roman Weidenfeller's left-hand upright from a tight angle to send a timely reminder of the Reds' threat and give the home crowd a lift.

And the deadlock was broken in the next attack, with Koroki getting ahead of Lukasz Piszczek to fire in from Yosuke Kashiwagi's corner.

Bartra's busy day continued when he skewed an untidy effort wide after the ball fell kindly for him eight yards out.

It should have been 2-0 before the break, but Rafael Silva shot straight at Weidenfeller with the goal at his mercy.

Bosz made five changes at half-time, with Bartra and new signing Omer Toprak among those to make way, while Gotze was thrown into the action after struggling with a metabolic disorder.

Mor was another of those to be introduced at the interval and he levelled matters 14 minutes from time with a toe-poked finish beyond Shusaku Nishikawa.

The Turkey international was on the mark again three minutes later when he received a cutback from Marcel Schmelzer before seeing his deflected strike hit the back of the net.

Dortmund were exposed from another corner when Endo nodded home, but he went from hero to villain as his poor defensive header ran to Schurrle to provide a decisive finish.