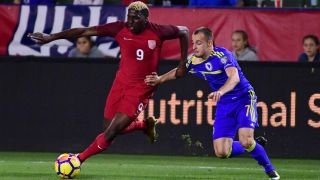 A youthful United States played out a 0-0 draw against an undermanned Bosnia-Herzegovina in an international friendly in California on Sunday.

The visitors had the best chance to find a winner at the StubHub Center in Carson after being awarded a second-half penalty.

However, Haris Medunjanin – the most experienced player in Bosnia-Herzegovina's squad – struck the post with his spot-kick in the 53rd minute.

It was a first game in charge for Robert Prosinecki, who was appointed the nation's coach earlier this month.

USA, who were without a host of first-team regulars as they played under interim coach Dave Sarachan, also had their chances in the draw.

Only four players in USA's 20-man squad had made more than 10 appearances for the national team, as they experimented in a match played outside a FIFA international window.