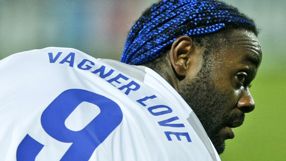 "Vagner Love - the best scorer in the club's newest history (after the break-up of the Soviet Union in 1991) - will wear number nine," CSKA said on their website.

The forward, easily recognisable on the pitch with his distinctive coloured braids, has scored 117 goals in 244 games for the army club.

Vagner joined Flamengo on a long-term deal, worth some 10 million euros last January, but has returned to Moscow just 12 months later.

He first joined CSKA in 2004, helping them to two domestic league titles, five national cups and the UEFA Cup in 2005 when they became the first Russian club to win a European trophy.

Despite his prolific scoring record in Russia's top flight, the Brazilian always maintained his desire to return to his home country.

He was loaned to Palmeiras, his first professional club, in 2009 but after struggling there, moved to Flamengo for another six months before returning to CSKA the following year.

Vagner will try to help CSKA in their bid to win the league title for the first time since 2006 as they lead big spenders Anzhi Makhachkala by two points with 11 games remaining.

CSKA have struggle for goals since their top scorer last season, Ivory Coast's Seydou Doumbia, suffered a back injury at the start of the new campaign in July. The Russian league season resumes in mid-March after a three-month break.