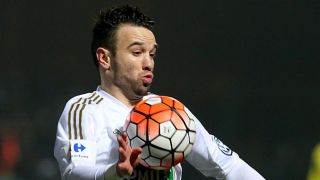 Lyon midfielder Mathieu Valbuena believes he is through the worst of a difficult season on and off the field.

Valbuena was the victim of sustained abuse from the stands during the reverse fixture in September, before finding himself the victim of an alleged attempt at blackmail over a sex tape.

Fellow France international Karim Benzema was charged with complicity in an alleged attempt to extort Valbuena and participating in a criminal conspiracy as part of an on-going investigation.

Real Madrid striker Benzema has strenuously denied any wrongdoing, while Valbuena said he was "more than disappointed" by his colleague's alleged conduct.

The 31-year-old conceded his form on the field suffered during that time but he is now focused on improving Lyon's fortunes and securing a place in the France squad for Euro 2016.

He told Le Figaro: "Everything was a bit complicated, especially for my family. On the ground, my performances were not up to what I wanted.

"I was disappointed but the worst is behind me. I must make progress towards the Euros and the France team.

"This is my motivation, my everything. Any French player dreams of selection and [to] participate in a competition like the Euro, especially at home."