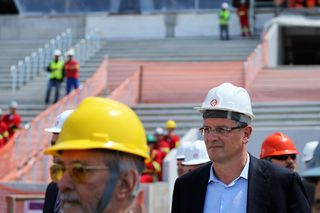 The stadium in Cuiaba, a city in the south-west of Brazil, was visited by Valcke and a FIFA delegation this week and has been placed under 'permanent monitoring' due to concerns about the project's progress.

With just over 240 days remaining until the World Cup begins, concerns have been raised regarding the slow progress of the stadium development, following local protests fuelled by the use of public money to fund the tournament.

And while Valcke has maintained the Cuiaba venue will be ready in time, he has conceded the facilities may not be 100 per cent complete.

"It's again (a matter of) when the stadium will be ready to install all of the facilities we need for the World Cup.

"Mainly, IT, the seats and a number of things we need in the precinct for the hospitality and for the TV compound.

"So that's where we are working with them and speeding the process there."

Valcke explained FIFA and the Brazilian Local Organising Committee will continue to scrutinise Cuiaba's progress regularly to ensure it is ready for the World Cup.

"So we have people going there regularly to meet those responsible for the construction of the stadium for the precinct and for the pitch to make sure.

"There is no time to lose days to have this stadium ready for the World Cup."