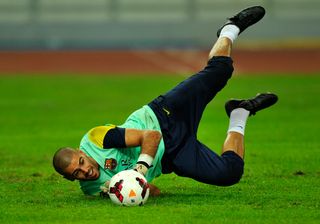 The 31-year-old is in the final year of his contract at Camp Nou and has previously revealed that he will leave when it expires to continue his trophy-laden career elsewhere.

Valdes was a reported transfer target for Monaco in the close-season, as well as Arsenal and Manchester City.

With Monaco top of the table at present on goal difference on the club's return to the French top flight and former Barca left-back Eric Abidal in the ranks at Stade Louis II, Valdes has expressed an interest in moving to the Ligue 1 leaders.

He told Telefoot: "I've been at Barcelona for 10 years. It has been a great 10 years but my adventure with Barca ends this season.

"Monaco might be a good choice. As a professional, Ligue 1 attracts me.

"(Eric) Abidal is very happy there and he is a good friend of mine.

"I consider him to be a brother after everything we have loved through together.

"To play with him again would be special."