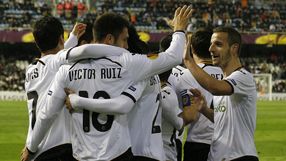 The victory, only a second success for Unai Emery's side in seven league outings, put them four points clear in third place of Malaga with four games left and tightened their grip on an automatic place in next season's Champions League.

Valencia have 55 points, with Malaga on 51 in fourth, a Champions League qualification berth, ahead of their game at Osasuna on Monday.

Jonas exchanged passes with Roberto Soldado and poked the ball past Betis goalkeeper Fabricio to open the scoring in the sixth minute at the Mestalla.

Betis defender Jose Antonio Dorado was shown a straight red card early in the second half when he brought down Sofiane Feghouli before the French midfielder picked himself up to volley the home side's second from a Sergio Canales centre five minutes later.

Soldado added a third four minutes from time, substitute Pablo Piatti twisted the knife with a fourth and Betis's misery was complete when Jorge Molina was dismissed for protesting a decision in the dying moments.

"It was an important win for us and now we focus on Thursday," Canales, who has impressed since his recent return from a knee injury, said in an interview with Spanish TV.

"We know that Atletico are going to be a very tough proposition as they were in the first leg but if we play like we did tonight then we have a chance," he added.

A quickfire Arda Turan double, including an acrobatic bicycle-kick, fired Atletico to a 3-1 home win over Espanyol that lifted them up to seventh.

The Turkey playmaker settled the match at a sun-bathed Calderon when he volleyed in Juanfran's centre in the 59th minute before dancing his way through a cluster of defenders and netting off a post.

Diego Godin had nodded Atletico in front in the ninth minute and Didac Vila levelled for the visitors with a shot that went in off the underside of the bar 10 minutes later.

"Arda's presence in front of goal was a necessity that we have been crying out for," Atletico coach Diego Simeone, who has revived the club's fortunes since taking over at the turn of the year, told a news conference.

"He is a player who tactically and technically is very important for the team," added the former Argentina captain and Atletico fan favourite."

Atletico's victory boosted their chances of playing in Europe again next season and put them on 48 points with four games left, level with sixth-placed Athletic Bilbao and a point behind Levante, who drew 1-1 at Sevilla on Saturday.

Bilbao won 1-0 at bottom club Racing Santander, a result which left the Cantabrian club on the brink of relegation.

Gaizka Toquero struck early for the Basques, who host Portuguese side Sporting in their Europa League semi-final second leg on Thursday having lost last week's first leg in Lisbon 2-1.

Leaders Real Madrid have one hand on a first league ti