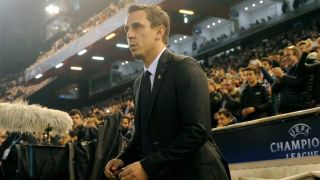 Rafael Benitez's grip on his position as head coach at Madrid continued to appear flimsy as his side laboured to a 3-1 home win over Real Sociedad on Wednesday, a match where he was once more subjected to jeers from the Santiago Bernabeu stands.

From his time as Liverpool manager, Benitez will remember Gary Neville as a combative playing opponent during the fiercely contested matches against bitter rivals Manchester United.

Now in the dugout himself with Valencia, Neville is still waiting for his first Liga victory at the helm after a stunning free-kick from Bruno gave Villarreal a 1-0 win at El Madrigal on Thursday.

Despite pressure on their defiant boss, Madrid remain firmly in the title hunt – two points behind defending champions Barcelona and neighbours Atletico Madrid at the summit.

Lucas Vazquez came off the bench to score his first Madrid goal and seal victory against Sociedad, and the winger has no issue with the continued ire from the club's supporters that has rarely let up since November's 4-0 Clasico defeat to Barca.

"The crowd are entitled to do as they see fit, whether that's applauding or whistling," Vazquez told Real's official website.

"If they feel it was best to whistle, we respect that. The coach is free to express his opinions just like the crowd, and you have to respect that.

"We focus on playing and winning games. We're right behind the coach and we work hard day in, day out to get wins on the board. My New Year's wish is for trophies, which is what we all want".

Following the Villarreal defeat, Neville stated that Valencia face a tall order if they are to secure a top-four finish and Champions League football.

They sit 10th, 11 points behind their most recent opponents in fourth.

"We know our situation, we have to improve and we will fight for it," defender Antonio Barragan told his club's official website.

"We are sad but we will continue working to reverse the situation.

"We have to add in threes [wins] to be up there as soon as possible. I trust and I will always trust this team."

Striker Alvaro Negredo made his first start for Valencia in La Liga since October at Villarreal, having fallen out of favour with previous coach Nuno Espirito Santo, and the former Sevilla and Manchester City player believes the next month under Neville could be pivotal.

"The team is united and we will try to get the win as soon as possible," he said.

"For the next year I hope we can do things better and to achieve the objectives for the end of the season. January is the key month."

The recent history of the fixture does not make for kind reading for ex-Valencia boss Benitez, who has captain Sergio Ramos back in training after missing out against Sociedad

Madrid are winless in their last three matches against Valencia, with consecutive 2-2 draws at the Bernabeu coming either side of a 2-1 triumph for the home side thanks to goals from Barragan and the now departed Nicolas Otamendi.

- Valencia have only won one of their last 12 league games against Real Madrid (D4 L7).
- Los Che have gone 20 Liga games at home without a defeat. If they avoid a loss against Madrid they will set their best undefeated home run since October 1990 (22 matches).
- Real Madrid have lost two of their last three Liga away games, at Sevilla and Villarreal.
- Three of Madrid's past six away goals in La Liga have been scored by defenders - Marcelo, Sergio Ramos and Danilo.
- Rafael Benitez has only one win in four top-flight games against Valencia (D1 L2).