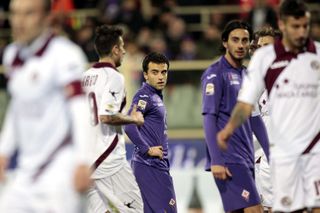 Rossi has scored 14 goals in Serie A this season as Fiorentina have pushed into the top four of Italy's top flight but the 26-year-old striker will miss the next six weeks with knee ligament damage after twisting his right knee in a 1-0 win over Livorno on Sunday.

Valero is Fiorentina's next most prolific goal-scorer in Serie A with five strikes to his name and the Spanish midfielder knows the Florence-based club will have to work hard without Rossi to maintain their position on the league table.

"It's always difficult to do without a player of Giuseppe's level, as we miss him so much, but fortunately we have other champions in the squad and they proved that," Valero said after Fiorentina's 2-0 Coppa Italia victory over Chievo on Wednesday.

"It's positive that we have different options and can take on so many different tactical systems."

Joaquin and Ante Rebic both scored in the first half as Fiorentina qualified for the Coppa Italia quarter-finals.

It was Fiorentina's fifth win in a row in all competitions.

"This gives us more confidence going into the next games," Valero said ahead of consecutive league trips to Torino and Catania.

Torino sit seventh in the table, and have not lost in their past five games at home.