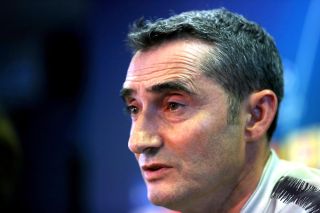 Barcelona coach Ernesto Valverde is targeting a maximum points haul from this week’s two LaLiga matches to ignite their stuttering title defence and nip any murmurings of crisis in the bud.

Barca head into fixtures against Villarreal and Getafe having picked up just seven points from a possible 15 so far – their worst start to a season in 25 years.

The Catalan giants’ problems can be traced to various issues, not least the absence of star man Lionel Messi for their opening four games through injury, but it is their away form that is proving the main headache.

🔊 Ernesto Valverde: "We want to pick up the six points in play this week." #BarçaVillarrealpic.twitter.com/kn6RM53iHp— FC Barcelona (@FCBarcelona) September 23, 2019

Saturday’s 2-0 defeat at promoted Granada left Barca with just one point from three away games this season, and they have not won on their travels in any competition since April – a run of seven matches.

That has inevitably drawn the attention of critics and doom-mongers, but Valverde knows the best response is to get points on the board.

He told a press conference ahead of Tuesday’s visit of Villarreal: “In the world of football talk of crisis comes quickly. You enter into crisis every three days and you also come out of crisis in three days.

“Now we have two games this week and we want to pick up six points, starting tomorrow. That’s the only way everyone is much calmer.”

While Barca’s travel sickness has shown no sign of easing, they have had no such problems surrounded by the comforts of home.

The champions have won both their matches at the Nou Camp this season 5-2 and have only lost one league game in front of their own fans since September 2016.

Villarreal will become the latest team to try emulate Real Betis’ feat from 10 months ago on Tuesday night and Valverde admits his side will need to have their wits about them against in-form Yellow Submarine.

He said: “Villarreal are a team who always make life complicated for us and who have started the season well, spurred on by last season’s difficulties.

“They have very fast players up front like Samu (Chukwueze) and (Karl Toko) Ekambi and very good players in the middle like (Santi) Cazorla.

“We have to continue along the same line as our two home games and forget about what happened the other day.”

Ousmane Dembele could make his first appearance since the opening day after recovering from injury, but Jordi Alba and Samuel Umtiti are still sidelined and Ivan Rakitic has been left out.

Villarreal head up the east coast looking to continue their climb up the standings.

They are now seventh, one point and one place above Barcelona, after beating Leganes and Real Valladolid in their last two matches.

It would have been three wins on the bounce but for a late Real Madrid equaliser at the Estadio de La Ceramica earlier this month, and coach Javi Calleja is looking for more success on Tuesday.

He said in Marca: “I’m hoping for a nice game for the spectators. We’ll both be looking to attack, we’ve scored a lot of goals at the start of this season and we’ll not give up.

“We will try to keep a clean sheet like we’ve done in recent weeks and hurt Barcelona with our weapons.”