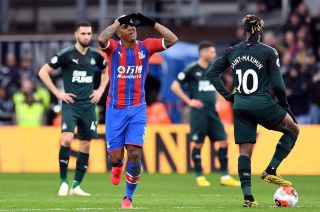 Patrick Van Aanholt was pleased to help Crystal Palace return to winning ways with the only goal in the 1-0 victory over Newcastle in the Premier League on Saturday.

The former Sunderland defender was booed by the visiting fans at Selhurst Park in the early stages given his connection with the Black Cats, but delighted the home faithful with a wonderful free kick in the 45th minute.

Van Aanholt revealed post-match he changed his mind in the run-up, after noticing Martin Dubravka move more to one side in the Magpies goal.

“We knew it was going to be a tough game, we knew we needed the three points,” he told the official club website.

“I saw him (Dubravka) standing to the left more so I changed my mind last minute.

“I enjoyed it. It got us the winner and it’s always nice to get on the scoresheet, especially when you get the three points.”

The victory was Palace’s first in 2020 and moved them nine points above the relegation zone ahead of Saturday’s trip to rivals Brighton.

“I was pleased for him. We rate Patrick Van Aanholt very highly and we know what level of technical ability he has both in open play and set-plays,” Roy Hodgson added.

“With Luka not playing through illness, he said to me ‘I’ll take a penalty if you want, you can trust me, I’ll score’ and that is the sort of confidence I like to see in a player.

“It is also the confidence I have in him, because I would feel comfortable with him doing that because I know what level of technical ability he has.”

Palace would have won by more had Dubravka not been excellent in the Newcastle goal, although manager Steve Bruce admitted the goalkeeper would have been frustrated with his part in Van Aanholt’s sweetly struck free kick.

“Arguably our best player (on the day) will be disappointed when he sees the goal back because he tried to read it going the other way,” the Magpies boss said.

“Knowing the way goalkeepers are, going in his side, he will be disappointed he didn’t save it.