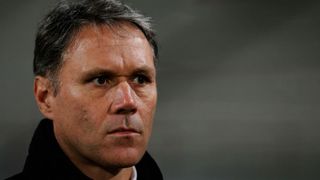 The Dutch legend was reported to be suffering from heart palpitations following the death of his father in July and, after missing an Eredivisie clash with Dordrecht towards the end of August, was granted an extended leave of absence.

Van Basten subsequently elected to switch to the role of assistant at AZ, with John van den Brom stepping into the top job.

"It's not easy being the first man as a trainer," Van Basten told Sky Sports.

"Now I'm the second man I feel much more comfortable. It's easier and I prefer it.

"I feel more comfortable in the situation I am in now. I feel I have much more freedom as I have a different responsibility. I'm more worthwhile to the club now than when I was the first-team coach.

"I love working with the players. Getting them together and talking about situations. That is what I like."

And Van Basten suggests he will not be rushing into another head coach role any time soon.

"There is a lot of pressure on the coach that's for sure," he added.

"Twenty-five years ago they seemed to talk a lot more about the players than they did about the coaches. That seems to have changed a little bit."