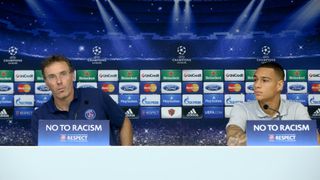 Gregory van der Wiel has hit out at Laurent Blanc after deciding not to extend his expiring contract with Paris Saint-Germain.

The Netherlands international is due to leave PSG after four years with the Ligue 1 champions.

Van der Wiel made well over 100 appearances in all competitions during his time with the club, but he often had to settle for a spot on the bench in big games.

The right-back has now slammed Blanc for his poor communication and has suggested he would have stayed put had it not been for the 50-year-old.

"I would have loved to stay at PSG, but I think everyone understands my decision to leave," Van der Wiel told Eurosport.

"I always gave my all to try to win a starting berth. But it's proof that the coach does not really believe in you when you are on the bench even when others are not available.

"We never really talked to each other. Not at all to be honest. I don't think Blanc likes to talk with his players. He never told me why I was second choice or third choice. Maybe I could have understood things had he explained it to me.

"I felt really bad about that. I was really disappointed, because I think I am good enough to play in the Champions League.

"I think the people will understand why I don't want to stay in this situation. I prefer to go to a club where the coach does believe in me and where I will play regularly."