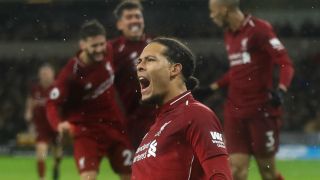 The Dutch centre-back capped a brilliant display with his first Premier League goal for the club, adding to Mohamed Salah's first-half opener, as the Reds moved four points clear at the top.

Despite feeling under the weather, Van Dijk made himself available for the match to ease Jurgen Klopp's defensive crisis, with Joe Gomez, Joel Matip and Trent Alexander-Arnold all out injured for the start of the busy festive period.

Van Dijk was happy to play his part in another important victory for Liverpool - their seventh in a row in the league - which ensured they will be top at Christmas, regardless of Manchester City's result against Crystal Palace on Saturday.

"Wolves are very good, which they have shown all season. We lost the ball too easily a couple of times in the first half and they did well.

"Credit to them but we won the game and that's always the most important thing.

"Teams are getting dangerous but it's how we react. There were a couple of moments where Wolves were dangerous, but we dealt with them well.

"All my [defensive] partners are very good and it is a joy to play with all of them. I'm enjoying every minute of it and have been all season.

"We've got Joe and Joel out for now, but Dejan [Lovren] is doing fantastically and has been since I came here anyway."