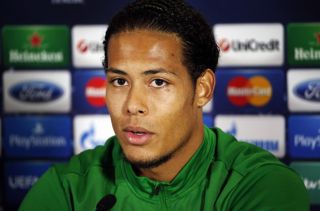 The 22-year-old has caught the eye in his first season in Glasgow following his arrival from Groningen as part of the Celtic team that romped to the Scottish Premiership title.

Manager Neil Lennon has outlined a desire to keep Van Dijk and the Dutchman has indicated that he has unfinished business at Celtic following disappointing exits from the UEFA Champions League and the Scottish Cup this season.

When quizzed on rumours linking him with Premier League clubs Arsenal and City, Van Dijk told the Daily Star: "I don't know anything about it.

"First of all I have a contract until 2017 I think, so I don't have to move, and I think the Champions League is always a big thing for every player. I want to play Champions League.

"We disappointed this season in the cup and the Champions League and we want to do much better next year.