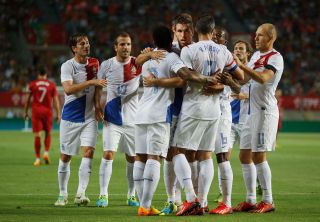 Van Gaal's men were just minutes away from winning on the road after new Roma signing Kevin Strootman gave them the lead in the 17th minute.

But the Netherlands missed out on their first win over Portugal since 1991 as Cristiano Ronaldo struck an equaliser with three minutes to play.

Van Gaal acknowledged that a draw was still a good result, but questioned his side's fitness and composure in the second half.

The manager – who did not include Galatasaray midfielder Wesley Sneijder in his squad for fitness reasons – felt his side ran out of steam in the latter stages.

"If you do not lose against teams like Germany, Italy and Portugal, you are doing it right, but after the break we had possession and played very badly.

"We could not hold the ball and we saw the candle going out with some of the guys."

The Netherlands have not lost a match since August last year and are on the verge of sealing their spot at the 2014 FIFA World Cup, with six wins from as many qualifying matches.