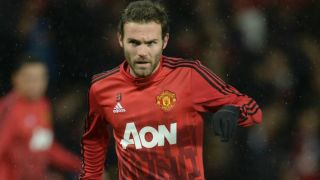 Manchester United manager Louis van Gaal substituted Juan Mata because the Spaniard was "never there" when asked to play out wide against Sheffield United on Saturday.

Mata was deployed on the right by Van Gaal but lasted just an hour after the Dutchman replaced him with Memphis Depay, while Jesse Lingard came on for Ander Herrera.

Depay went on to win the penalty in stoppage time, which Wayne Rooney dispatched to send United into the fourth round of the FA Cup courtesy of a 1-0 win.

Van Gaal was unimpressed with Mata's work-rate and inability to hug the touch-line when United needed width.

"We needed to play with wingers to make the pitch as big as possible. So we improved by restoring the shape," Van Gaal explained.

"Memphis and Lingard did that, I also asked that of Mata but he was never there.

"Then [Matteo] Darmian has to be the right winger and he tried to do that but that is not his speciality and that's why I changed.

"I am very happy that because of one of Memphis' actions he causes the penalty."