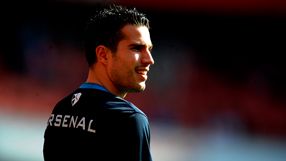 The Dutchman conceded that advice from Arsene Wenger helped him transform from a deep-lying forward to one of the best strikers in Europe.

“I was hoping to play as a second striker... I never thought I would end up as a main striker,” Van Persie told the club website. "We only tried it when [Emmanuel] Adebayor went to Manchester City.

"The boss said: 'I think you can do it, give it a go and see where it ends. Play your normal game, don't go out there to score, go out there to enjoy yourself and help the team'.

“I had a go and then in pre-season we had a game against Inter Milan and I scored a good goal and played well, and he told me after the game: 'We will see how it goes, I am 100 percent sure it will work'.

"Then in my first five or six games I didn't score, I was making assists and playing well, but I didn't score and I thought: 'I am a main striker now, I need to score' and the boss said: 'I don't mind that, as long as you play well for the team, giving assists, the goals will come'.

"When I scored my first goal I then scored seven in seven, with seven assists, so that was quite good. That was my first step to being a main striker."

Van Persie has scored 26 goals in the Premier League for the Gunners this season, making him the division’s top goal-scorer.