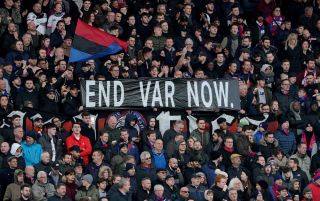 Over two-thirds of respondents in a YouGov survey believe VAR has made the Premier League less enjoyable to watch.

The technology is in use for the first time in the English top flight this season and has been arguably the main talking point of the campaign.

A poll last month of 1,396 adults who regularly watch Premier League football found that 67 per cent felt matches were now less enjoyable since the introduction of VAR.

Six out of 10 of those surveyed felt the system was working badly, and its performance was scored four out of 10 on average by the group of football watchers. Neil Swarbrick, the man who oversees the system for Professional Game Match Officials Limited (PGMOL), gave it a seven out of 10 earlier this season.

Despite that low average performance score, only 15 per cent of those surveyed wanted the system to be scrapped altogether with 74 per cent saying it should be kept, but modified.

Eighty one per cent felt that supporters should see the incident under review at the same time as the officials see it, while 80 per cent felt referees should be encouraged to use the pitchside monitors.

Currently the advice to Premier League officials is to use these sparingly and trust in the guidance of the VAR, with a view to making a quicker decision.

Seventy three per cent felt it would help if supporters and television viewers could hear the conversation between the on-field referee and the VAR, and 71 per cent favoured a time limit being imposed on how long a decision can take.

Matt Smith, lead data researcher at YouGov, said: “VAR has undoubtedly left its mark on the Premier League this season, with almost every manager’s post-match interview featuring grumbles about its decisions.

“New YouGov research shows that not only do a majority of Premier League viewers think that VAR is working badly, they also say that it’s ruining their enjoyment too.

“But despite much social media hysteria, our research shows that a large majority of those watching the games actually want to see it reformed over a complete removal.

“In addition, many of the changes discussed amongst pundits and commentators poll well, with support for time limits on decisions and encouragement for more pitchside screen use.

“One of the major criticisms of the current system is that the spectator in the stadium is left in the dark while decisions are made and there is strong support for being able to see footage as it’s being shown to VAR refs, as well as hearing the conversation the referees and the video assistant referees are having.”

The Premier League is understood to be currently working to the limit in terms of replays it can show under protocols from the game’s law-making body the International Football Association Board (IFAB). IFAB also does not currently allow any kind of time limit around how long decisions take.

Since December increased information has been made available on stadium big screens to let supporters know what the VAR is checking.

The core principle of VAR is ‘minimum interference for maximum benefit’.