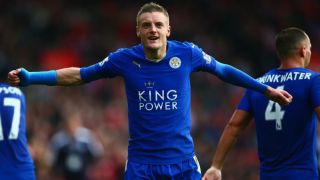 Vardy is the Premier League's leading scorer with 11 goals as high-flying Leicester prepare to face Watford on Saturday.

And the 28-year-old is determined to prolong his purple patch in front of goal.

"Everything I'm touching is going in. Long may that continue," said Vardy.

"That's how every striker should feel otherwise there's no point in being a striker, it's as simple as that, that's what I get paid for - to put the ball in the back of the net.

"Look at Riyad [Mahrez]. He's second in the goalscoring charts now and it just shows the goals can come from everywhere.

"There's still a long way to go, I'll get back on the training field and look at how I can break Watford's defence but I need my team-mates as well."