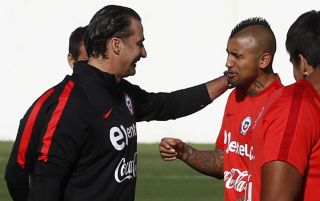 After beating Brazil and Peru to get off to a flying start in CONMEBOL qualifying, Copa America champions Chile drew with Colombia and were then beaten by Uruguay and Argentina.

Vidal missed the defeat to Argentina through suspension and is expected to return to the side against Venezuela, who are bottom of the group after four defeats in their five matches.

"Against Venezuela we must recover lost points," the Bayern Munich midfielder said.

"We played two straight games without getting points, but we need to confirm that we are the champions of America.

"I feel at my best, one hundred per cent, and that's what I want to demonstrate against Venezuela."

Chile will be without their captain, goalkeeper Claudio Bravo, who is suspended after collecting a late yellow card in the 2-1 loss to Argentina, with some critics accusing him of getting booked deliberately so he can return to Barcelona, where his partner is due to give birth.

"It annoys me when they criticise you for things that aren't true. I went up with the intention of scoring and it didn't go as planned, so it's hard that they question you," Bravo said.

"I've given everything to defend this shirt and it annoys me because I've never given up on the national team. I have no need to go back to my club."

Venezuela came close to their first win of the qualifying campaign on Friday, an injury-time equaliser from substitute Raul Ruidiaz earning Peru a 2-2 draw.

Striker Salomon Rondon will miss out through suspension, but Luis Manuel Seijas, Jose Manuel Velazquez and Roberto Rosales are available.

Velazquez added: "You have to be very concentrated. People like Alexis Sanchez change a game in one second. So the defensive solidity can tip the balance."